Get a Free Quote

This is a subheader about this company and what they do.

If you have a necessary page description, put it here. Can be SEO related; adjust as necessary or hide. 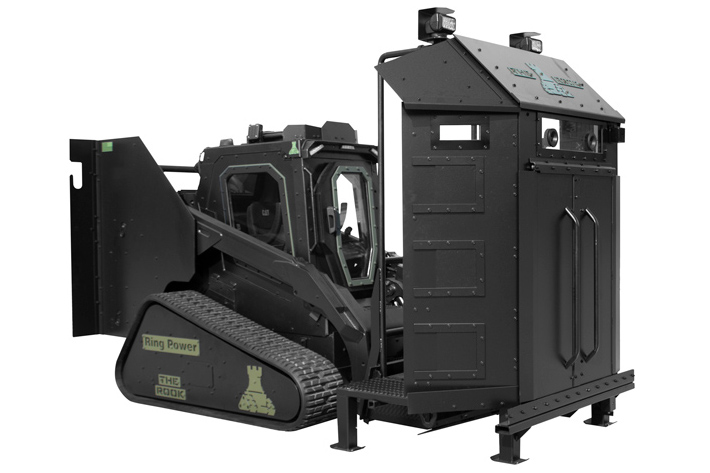 The platform provides for up to four fully-dressed officers, raises to 11ft for 1st or 2nd floor entry, has locking gun ports and... 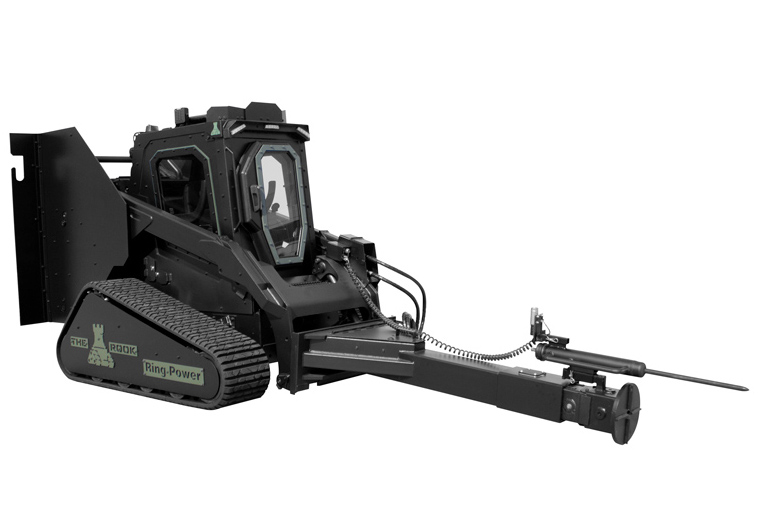 Delivering much more power than a hand-carried ram, this hydraulic ram extends from 6-10ft and gives a controlled breach of the structure including block walls... 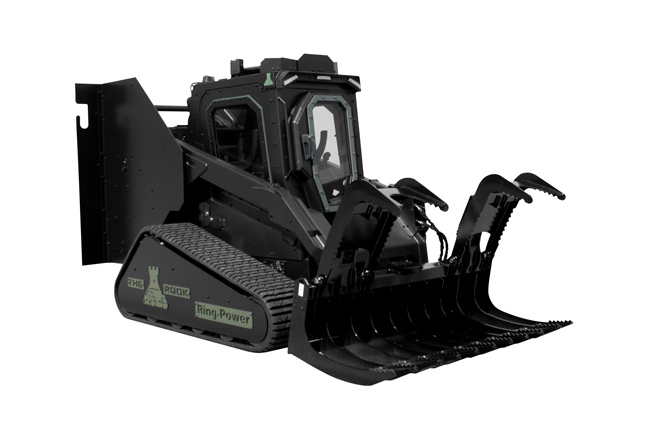 The versatile grapple claw and bucket can gain access to attics where suspects might barricade from ground level exposure or could aid in disaster relief... 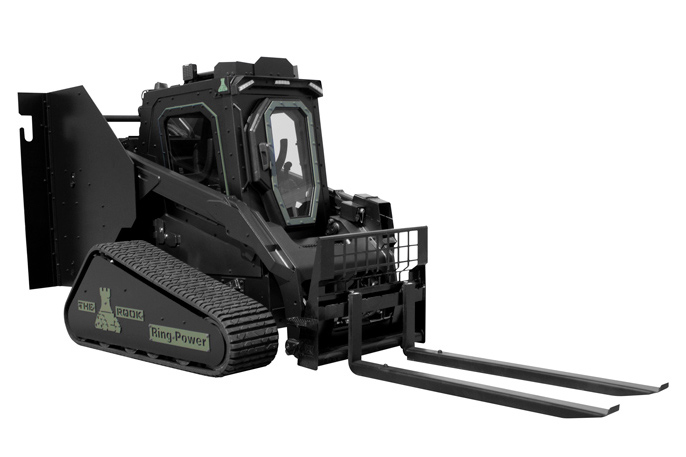 A powerful attachment for immobilization or removal of a vehicle in tactical applications. Push, pull or pickup the vehicle...

No Man Left Behind

Sign up to receive special offers, event info, product updates and more from The Rook - we won't leave you behind.

This is a subheader about this company and what they do.

The platform provides for up to four fully-dressed officers, raises to 11ft for 1st or 2nd floor entry, has locking gun ports and...

Watch and read law enforcement accounts of how The Rook has been proven in the line of duty. 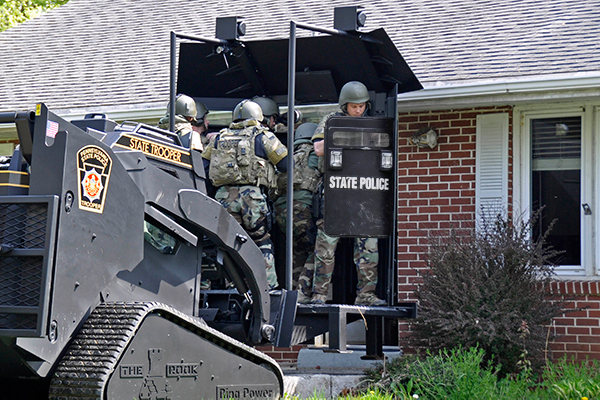 Major Stone describes how Pennsylvania relies on The Rook for "rapid and safe resolutions" for multiple incidents. 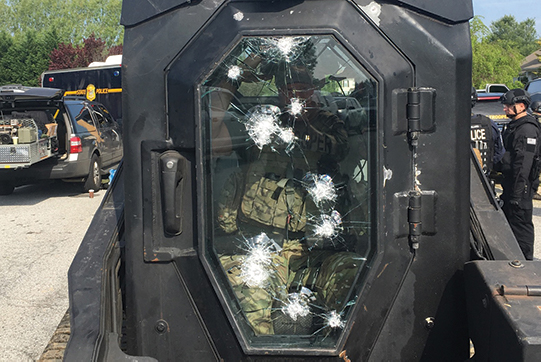 ﻿Resolving a Standoff with a Cop Killer ﻿

Delaware State Police take fire resolving a standoff with a cop killer and debrief us on the incident and the Rook's performance.

Click a link to jump down to each testimonial 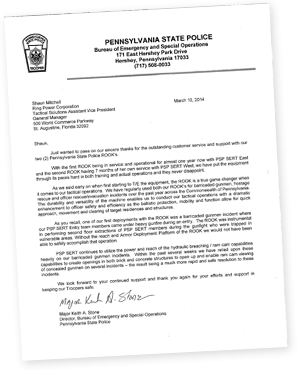 Just wanted to pass on our sincere thanks for the outstanding customer service and support with our two (2) Pennsylvania State Police ROOK's.

With the first ROOK being in service and operational for almost one year now with PSP SERT East and the second ROOK having 7 months of her own service with PSP SERT West, we have put the equipment through its paces hard in both training and actual operations and they never disappoint.

As we said early on when first starting to T/E the equipment, the ROOK is a true game changer when it comes to our tactical operations. We have regularly used both our ROOK's for barricaded gunmen, hostage rescue and officer rescue/evacuation incidents over the past year across the Commonwealth of Pennsylvania. The durability and versatility of the machine enables us to conduct our tactical operations with a dramatic enhancement to officer safety and efficiency as the ballistic protection, mobility and function allow for quick approach, movement and clearing of target residences and structures.

As you recall, one of our first deployments with the ROOK was a barricaded gunmen incident where our PSP SERT Entry team members came under heavy gunfire during an entry. The ROOK was instrumental in performing second floor extractions of PSP SERT members during the gunfight who were trapped in vulnerable areas. Without the reach and Armor Deployment Platform of the ROOK we would not have been able to safely accomplish that operation.

PSP SERT continues to utilize the power and reach of the hydraulic breaching / ram cam capabilities heavily on our barricaded gunmen incidents. Within the past several weeks we have relied upon these capabilities to create openings in both brick an(] concrete structures to open up and enable ram cam viewing of concealed gunmen on several incidents - the result being a much more rapid and safe resolution to these incidents.

We look forward to your continued support and thank you again for your efforts and support in keeping our Troopers safe.

View All →
Back to Top

The Collier County Sheriff’s Office received the Rook in February of 2020. Ring Power provided training to a select few from our agency and within our region. The training encompassed everything we needed to know to operate the Rook efficiently and effectively, which was proven only 1 month later when we deployed the Rook on an armed barricaded subject.

It was a call-out that began in the early afternoon and lasted 6 hours into the early evening. The location was a second story townhome in a high end community of North Naples. Originally we deployed the armored Bear Cat to work the surrender of the subject. The only access to the townhome was adjacent to a pond leaving only approximately 10 feet of working ground between the structure and the pond, with a heavy downgrade after 10 feet going into the pond. We positioned the Bear Cat next to the structure and quickly realized we were not going to be able to use the Bear Cat to approach the front door for a breach with the Bear Cats Ram. Although extremely effective, this situation was not ideal for maneuvering the Bear Cat in such confined spaces.

After several hours of communicating with no success and a search warrant obtained for the residence, we deployed the Rook. The Rook was able to be maneuvered down the walk way and up to the front door easily. Providing a position of cover for the team that was significantly closer to the door than what we had before. We were able to use the Rook’s Ram attachment to breach the front door with ease giving the team unobstructed access into the residence, and the structure and the subject were secured without further incident.

Without the Rook the team would have been opened to more risk eventually having to approach the front door from an LCC that was 50 feet away as opposed to 15 feet away. Combining the capabilities of the Rook with other resources has made our team and our community safer! 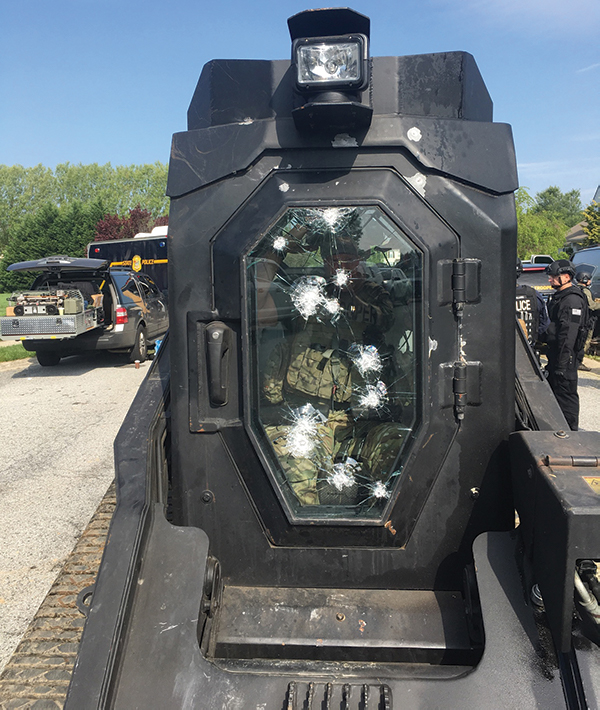 Taking fire from a barricaded Suspect

The armed suspect then fled the scene but quickly located at his family's residence in nearby Middletown, Delaware. The residence was a large two story structure located in a rural residential development. Inside the residence the suspect had access to additional weapons including handguns and rifles.

The Delaware State Police with assistance from numerous other, municipal and federal law enforcement agencies then underwent a 21 hour armed standoff with the suspect who continued to fire on the perimeter from concealed positions within the residence.

Continual efforts and attempts to negotiate a peaceful surrender were unsuccessful. Tactical measures to locate the suspect within the residence via other remote technologies and tactical robotic methods on scene and being made available to the Delaware State Police also proved unsuccessful.

As the standoff entered into the early morning of April 26, 2017, with the subject still occasionally firing on the perimeter and refusing to surrender, arrangements were made to transport and deploy one of the Pennsylvania State Police (PSP) ROOK units to the scene. The scene was not safe for a tactical entry team and all other efforts and tactics to locate the suspect had been exhausted.

The PSP ROOK arrived on scene accompanied by a small PSP SERT element of experienced ROOK operators and were briefed on the situation and mission by the Delaware State Police. The ROOK was immediately deployed to begin probing, clearing and exposing the large residence via the ROOK-hydraulic breaching ram and integrated ROOK Ram - Camera System. Within minutes of the ROOK being on scene and opening up a portion on the second floor of the structure, the ROOK operator who is a PSP SERT member, was able to locate and observe the armed suspect moving deep within the residence. The suspect no longer was able to remain out of sight and concealed within the safety and tactical advantage of his residence.

The armed suspect then immediately began to fire a .223 caliber rifle at the ROOK ballistic cab and glass from close range. The ROOK sustained 12 rapid .223 caliber rifle shots to the front ballistic glass as well as 8 additional .233 caliber rifle shots to the ballistic cab. The integrity of the ROOK operator cab remained fully intact and provided the lifesaving protection to the PSP SERT ROOK operator as it was designed to ensure. None of the rifle fire penetrated any portion of the ROOK, nor did any glass spalling occur.

Ring Power Tactical Solutions Division representatives monitored this incident closely as it unfolded. Upon conclusion of the incident, Ring Power immediately initiated customer support to inspect the ROOK and commence procurement and delivery of replacement ballistic glass to PSP to minimize the down time of the ROOK.

View All →
Back to Top

Get The Latest News and Updates